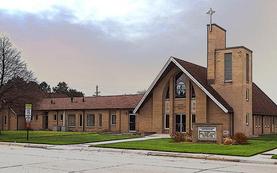 The First Congregational Church of Grand Island, Nebraska, was organized on June 16th, 1887, and held services at Sixth and Kimball Street.

The Free Evangelical Lutheran Church of Grand Island, Nebraska, was organized on October 14, 1906, and held services at Division and Vine Streets. In early 1956, the members of the Free Evangelical Lutheran Pilgrim Congregational Church become the nucleus of Park Community Church. In 1957, a fellowship/educational unit was built at Bismark and Oak Streets with the first service held there on October 6, 1957.

In 1963, the congregation moved to the Bismark and Oak site with services held in the Fellowship Hall. On April 4, 1965, a dedication ceremony for the new sanctuary was held. In 1985/86 a new educational unit and kitchen remodeling project was completed without having to borrow funds.